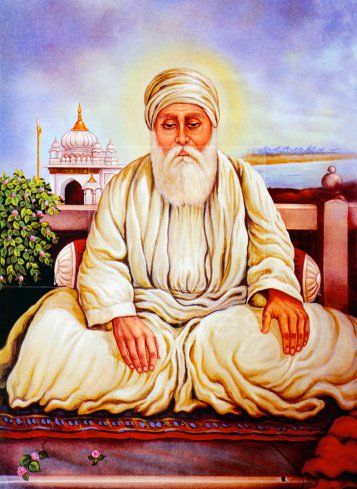 His Messages :
- To dispense with system of Sati and Parda.

Guru Amar Das was born on May 5,1479 in a village called Basarke in Dist. Amritsar. He was the eldest son of Sri Tej Bhan,a farmer and trader and Mata Lachmi, his devoted mother. He grew up to be a devotee of the Hindu deity Vishnu. Guruji married Mata Mansa Devi and had 4 children – 2 sons (Mohan & Mohri ) and 2 daughters (Bibi Bhani & Bibi Dani ). Bibi Bhani later married Bhai Jetha who became the fourth Sikh Guru, Guru Ram Das.

Guru ji\'sbrother, Manak Chand had a son, Jasoo, who had married, Amro, Guru Angad Dev\'s elder daughter. At the age of 61, Amar Das overheard Amro singing the hymns of Nanak and became a follower of Sikhism. Guru Amar Das became Sikh Guru at the age of 72 following in the footsteps of his teacher Sri Guru Angad Dev ji, who left the world on 29 March 1552 at age 48.

Amar Das presented himself to Guru Angad Dev in Khadur and became an ardent devotee. Under the impact of the teachings of Guru Angad Sahib, Guru Amardas Sahib adopted him as his spiritual guide (Guru). Then he started living at Khadur Sahib. He used to rise early in the morning, bring water from the Bias River for Guru’s bath and fetch wood from the Jungle for ‘Guru ka Langar. Amar Das tirelessly served the Sikh congregation for 12 years. His selfless service earned the trust of Guru Angad, who when he died at age 48, appointed Amar Das, age 73, to be his successor, and third guru of the Sikhs.

Guru Amar Das and Khivi, Angad Dev\'s widow, worked together to strengthen the tradition of ‘Guru ka Langer’, free meals served from the guru\'s communal kitchen and made it compulsory for the visitor to the Guru saying that \'Pehle Pangat Phir Sangat\'.

He preached against Sati, a Hindu custom compelling a widow to be burnt alive on her husband\'s funeral pyre and advocated widow-remarriage. The Guru encouraged women, to discard the \'Purdah\' veil.

He fixed three Gurpurbs for Sikh celebrations: Diwali, Vaisakhi and Maghi. He also composed 869 (according to some chronicles these were 709) verses (stanzas) including Anand Sahib, and Guru Arjan Dev made all the Shabads part of Guru Granth Sahib.

Guru Amardas Ji did not consider anyone of his sons to be fit for Guruship and chose his son-in law, Jetha to succeed him. Who was names as Guru Ramdas, as per the tradition established by Guru Nanak Dev Ji. Guru Ramdas Sahib had true sprit of service and his keen understanding of the Sikh principles made him the 4th Guru. Guru Amar Das ji passed away at the age of 95 on September 1, 1574 at Goindwal Sahib near District Amritsar.