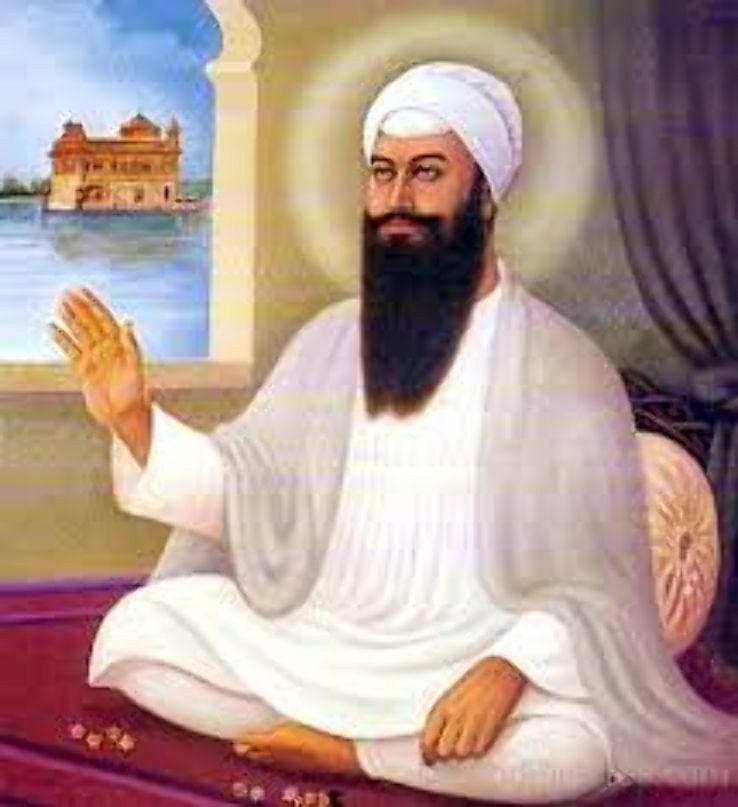 His Messages :
- Feel the essence of true life and the union of soul with the supreme being.
- Importance of Gurus and Saintly people in one\'s life.

Guru Arjan was the fifth Sikh Guru and the first Sikh martyr: he gave up his life for the Sikh people. He was born on April 15,1563 . He was the youngest son of Guru Ram Das and Mata Bhani. He received Gurgaddi on August 31st, 1581. He was the first Guru to have been born a son of the Guru. He was married to Ganga Devi daughter of Krishan Chand.

Guru Arjan Dev Ji was a great thinker, illustrious poet, a practical philosopher and a celebrated saint. The greatest contribution he made to the Sikh faith was to compile all of the past Gurus\' writings into one book, now the holy scripture: the Guru Granth Sahib.. Additionally Guru Ji contributed a total of 2218 hymns to the Sri Guru Granth Sahib. He is the Author of the Sukhmani Sahib Bani – Prayer for Peace.

Guru Arjan Dev laid the foundation of the Harmandir Sahib (Golden Temple) in the middle of the tank of Amritsar. All of the Sikhs desired that it should be the tallest building in the new town. Guru Arjan however felt otherwise. He reminded his followers that humility should be a great virtue. The temple was therefore built on as low an elevation as possible.

Guru Arjan Dev Ji constructed the holy (Sarovar) tank at Tarn Taran and founded the city of Kartarpur near Jalandhar. The city of Sri Hargobindpur on the banks of river Beas was founded by him to celebrate the birth of his son Hargobind Sahib Ji.

Guru Arjan Dev Ji enhanced the Structure of Sikh Society by introducing the Masund system, a group of representatives who taught and spread the teachings of the Gurus and received the Daswandh. He encouraged the Sikhs to contribute Daswandh (one tenth of the earnings) for community purposes. Sikhs paid the Daswandh to support the building of gurdwaras and langars (shared communal kitchens). Although the introduction of the langar was started by Guru Nanak, Guru Arjan is credited for laying the foundation of the systematic institution of langars as a religious duty, one that has continued ever since.

Guru Arjan was arrested under the orders of the Mughal Emperor Jahangir and asked to convert to Islam. when he refusedto do so, he was arrested, tortured and made to sit on hot iron plates at Lahore. He was martyred on May 30th, 1606 in Lahore.