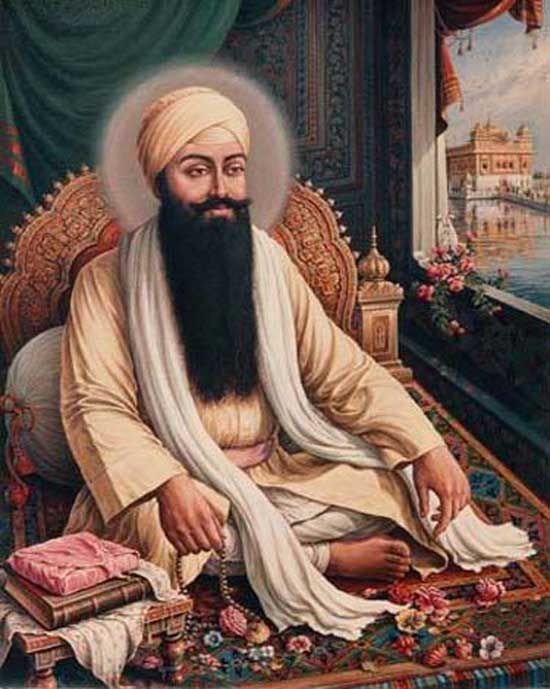 His Messages :
- Be true Sikh.
- Imbibe the name of God.
- Sing the glory of Gurus

Guru Ram Das was born on September 24, 1534 to simple God-fearing parents, Hari Das and Anup Devi of Lahore. Ram Das was popularly addressed as Jetha, being the first-born of his parents (Sanskrit word Jayeshth means the first). He was married to Bibi Bhani the younger daughter of Guru Amar Das.

Guru Ram Das embodied humility, service, and deep devotion. His whole life was embodiment of love, devotion, dedication and service. All these noble sentiments are abundantly reflected in his writings. He composed 688 Hymns which have various teachings for Sikhs, which were incorporated into Adi Granth by his son and successor, Guru Arjan Dev. Guru Sahib's Bani is also part of Rehras Sahib and Kirtan Sohila which are daily prayers of Sikhs.

The standard Sikh marriage ceremony known as the Anand Karaj is centered around a four-stanza hymn composed by Guru Ram Das. Guru Ram Das Sahib composed a beautiful bani called Laavan about the meaning of marriage to a Sikh couple - Effectively, the Guru defines a Sikh marriage in these 2 lines: "They are not said to be husband and wife who merely sit together. Rather they alone are called husband and wife, who have one soul in two bodies."

He was planner and creator of the township of Ramdaspur which became the Sikh holy city of Amritsar. In Amritsar, he designed the gurdwara Harmandir Sahib, which translates as "The Abode of God" also known as the Darbaar sahib. As a Guru, one of his main contributions to Sikhism was organizing the structure of Sikh society.

Before Guru Ji died, he nominated his youngest son, Arjan Dev, as the next Guru of the Sikhs. Guru Ram Das left his physical form on September 16, 1581.