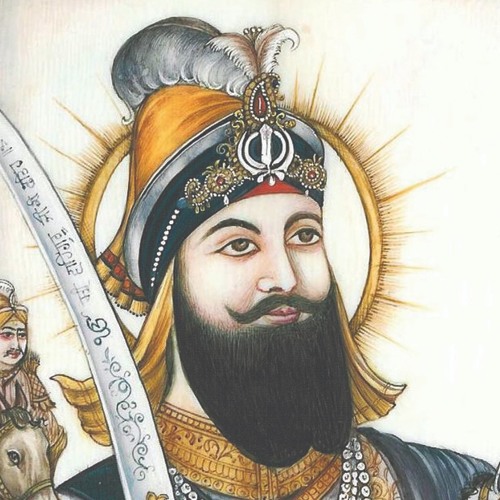 Guru Gobind Singh was the tenth and last of the ten human form Gurus of Sikhism. Guru Gobind Singh was born on December 22, 1666, Patna Sahib in State of Bihar in India. He was the only child of Guru Teg Bahadur and his wife Gujri, was named Gobind Rai at birth. He became Guru on November 24, 1675 at the age of nine, following in the footsteps of his father Guru Teg Bahadur ji. His wives were Mata Jeeto, Mata Sundari and Mata Sahib Kaur. He had four sons.

Guru Gobind Singh Ji was a great warrior and a spiritual leader. He infused the spirit of both sainthood and soldier in the minds and hearts of his followers to fight oppression in order to restore justice, peace, righteousness (Dharma) and to uplift the down-trodden people in this world. He sacrificed his all for human liberty, equality and fraternity.

Guru Gobind Singh introduced many of the customs that Sikhs practise today. In 1699 he created the Khalsa (Pure) at Sri Anandpur Sahib Ji, a community of the faithful who wore visible symbols of their faith and trained as warriors. The Khalsa represents the epitome of the Sikh way of life, with Guru Gobind Singh having himself professed "Khalsa mero roop hai khas, Khalse main haun karoun nivas (The Khalsa is my own special form. Within the Khalsa, I abide)". He urged the Sikhs to take a pledge to lead a pure life as taught by the other nine Gurus. Amrit was prepared and the first five Sikhs were initiated into the order of Khalsa Panth. Thereafter, the Guru took initiation from the Panj Pyaras and merged entity of Guru Ji into Panth and entity of Panth into Guru. The Sikhs were ordained to wear five Kakars and also to lead an exemplary life of Sikh Rehat. Guru Gobind Singh Ji gave the name of 'Singh' to males and 'Kaur' to females respectively to be used after their first name.

Before Guru ji left his mortal body for his heavenly abode, he nominated Sri Guru Granth Sahib ji (SGGS) as the next perpetual Guru of the Sikhs. The Guru Granth Sahib would thus be the Sikhs' guide forever. Sikhs give it the same status and respect as a human Guru.