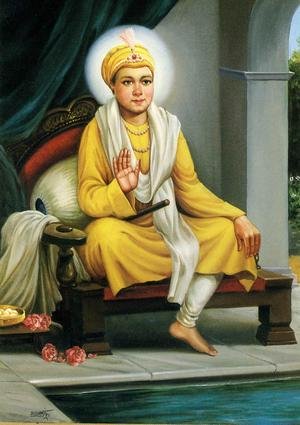 Ram Rai, the elder brother of Guru Har krishan Ji was ex-communicated and disinherited due to his anti-Guru Ghar activities. Ram Rai complained to emperor Aurengzeb in Delhi that he had been discriminated against because of his loyalty to the emperor and had not received his due share of the property of his father Guru Har Rai. Ram Rai knew that before his death Guru Har Rai had instructed Guru Harkrishan to never meet Aurengzeb. Emperor Aurangzeb, called the Guru Ji to Delhi on complaint by Ram Rai. In Delhi, Raja Jai Singh welcomed Guru Har Krishan and made arrangements for the Guru at his bunglow - this place is now known as the Gurdwara Bangla Sahib situated in the heart of New Delhi.

In those days the entire city of Delhi was in the grip of a smallpox epidemic, thousands of people died of infection. To provide relief to the suffering people Guru Harikrishan got a small pool constructed just outside his room and poured water in it, picked up a little water and again poured it in. He then put his foot in the pool of water and thus people would recite 'Satnam Waheguru' (sacred mantra) and take some of the water and be cured. The Guru provided a healing touch to the sick and is said to have taken smallpox upon himself. His tender body was ravaged by the disease, which led to his untimely demise on March 30, 1664. His body was cremated on the bank of river Jamna where now stands the Gurdwara Bala Sahib.

Before passing away, Guru called for five paise and a coconut. He took them and not being able to move his body waved his hand three times in the air by way of pointing out his successor and said "Baba Bakale" i.e. his successor will be found in the village of Bakala. The words were deeply significant as they helped in maintaining the line of succession, Teg Bahadur was appointed as the ninth Sikh Guru, who was his grandfather Baba Gurditta’s younger brother - affectionately called as Baba Bakala, or the elder uncle who lived in Bakala.

Guru Har Krishan had a rare ability in explaining passages from the Holy Granth. He delighted the hearts of his disciples by his commentaries. He reminded them to cherish the One God alone, and asked them to discard passions and learn the virtues of patience, charity and love.