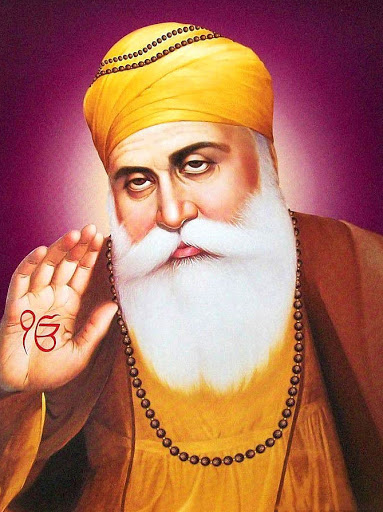 His Messages :
Kirat Karo - Earning a living honestly.
Naam Japo - Chanting the Holy Name and thus remembering God at all times .
Vand ke Chhakho - Sharing with others, helping the needy.

Guru Nanak was the first guru and the founder of the Sikh religion. Guru Nanak was born on April 15, 1469, in Talwandi in the district of Shekhupur, now known as Nankana Sahib, is near Lahore in present-day Pakistan. He showed people a new way of understanding the Ultimate Reality. At the time of Nanak\'s birth India had been under the muslim rule for more than five hundred years. Nanak\'s family, however, was a Hindu. His father Mehta Kaku, a higher caste khatri, was a revenue collector for the government and his mother was a pious and gentle woman. Nanak was named after his older sister Nanaki. Guru Nanak grew up in a multifaith environment, which impacted greatly on his understanding of the oneness of God.

Little is known about the life of Nanak, but Sikh tradition has a much-loved set of stories or janam sakhis which relate various incidents from his life, and include many of his important teachings.

As a young child, after the first day of his school, Guru Nanak stated the only learning that mattered to him was about the God. Guru Nanak from an early age evidenced a curious mind. He mastered the Vedas and Sanskrit and was enrolled into a madrassa to study Persian and Arabic.

At age 13 it was time for Guru Nanak to be invested with the sacred thread according to the traditional Hindu custom. At the ceremony which was attended by family and friends and to the disappointment of his family Guru Nanak refused to accept the sacred cotton thread from the Hindu priest. As a young man herding the family cattle, Guru Nanak would spend long hours absorbed in meditation and in religious discussions with Muslim and Hindu holy men who lived in the forests surrounding the village.

When Guru Nanak Dev ji was12 years old his father gave him twenty rupees and asked him to do a business, apparently to teach him business. Guru Nanak dev ji bought food for all the money and distributed among saints, and poor. As a young man, Nanak worked for a while for the Mughal conquerors in Sultanpur, but after receiving a \'revealation\', he made pilgrimages to all the leading hindu and muslim shrines.

At the age of 30 he mysteriously disappeared for 3 days. When he reappeared, he began to preach the Sikh faith and spent the rest of his life teaching, writing and travelling around the world. In 1496, although married and having a family, Nanak set out on a set of spiritual journeys through India, Tibet and Arabia that lasted nearly 30 years. Many of his hymns were composed during this period. They represent answers to the major religious and social problems of the day and cogent responses to the situations and incidents that he came across.

The last part of his life was spent at Kartarpur in the Punjab, where he was joined by many disciples attracted by his teachings. To his disciples, Nanak was the source of all truth, and as a symbol of their devotion they called themselves Sikhs, a name derived from the Sanskrit word Shishya, which means disciple.